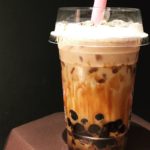 The Tiger Milk Tea recipe is named because of the stripes and colours which are formed on the glass when the drink is served.

Also known as Brown Sugar Milk Tea the brown sugar syrup makes up the tiger-like brown stripes and is made by simply simmering dark brown sugar and water until thickened.

The classic recipe does not in fact contain tea but resembles popular Taiwanese bubble tea and is often sold at the same tea shops.

If you’d like to include tea in the recipe then substitute half of the milk with strong black tea.

Learn how to make Tiger milk tea by following these steps.