What is the Difference Between Naan and Roti? 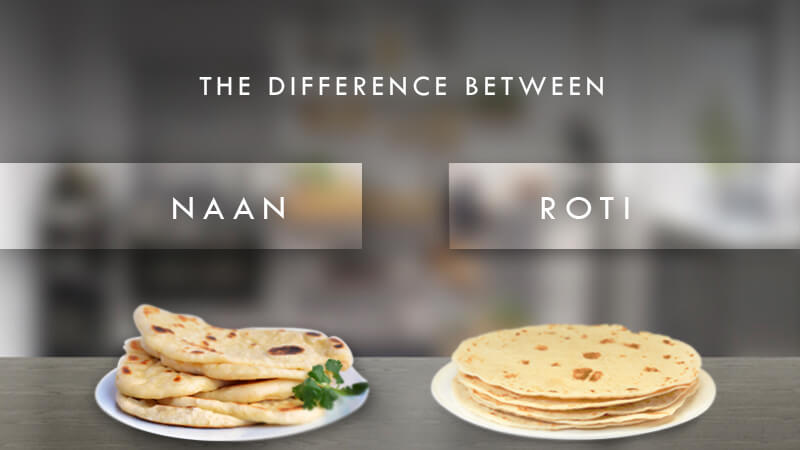 In this article, we are going to find out the difference between naan and roti. We will distinguish each bread from the other when it comes to texture, taste, and thickness.

Indian cuisine is as rich as its culture and heritage, with a deep appreciation for spices.

Aside from the hot meals and dishes, baked goods like bread also get a lot of attention. Tourists visiting India can vouch for how good the bread is, especially their flatbreads naan and roti.

What are the differences between naan and roti?

Bread is a great source of carbs, providing the body with the energy it needs throughout the day. In India, the unsung star of bakeries is roti or chapati as they call it.

This type of bread is easy to make, versatile, and has good nutritional value because of the wheat in flour. 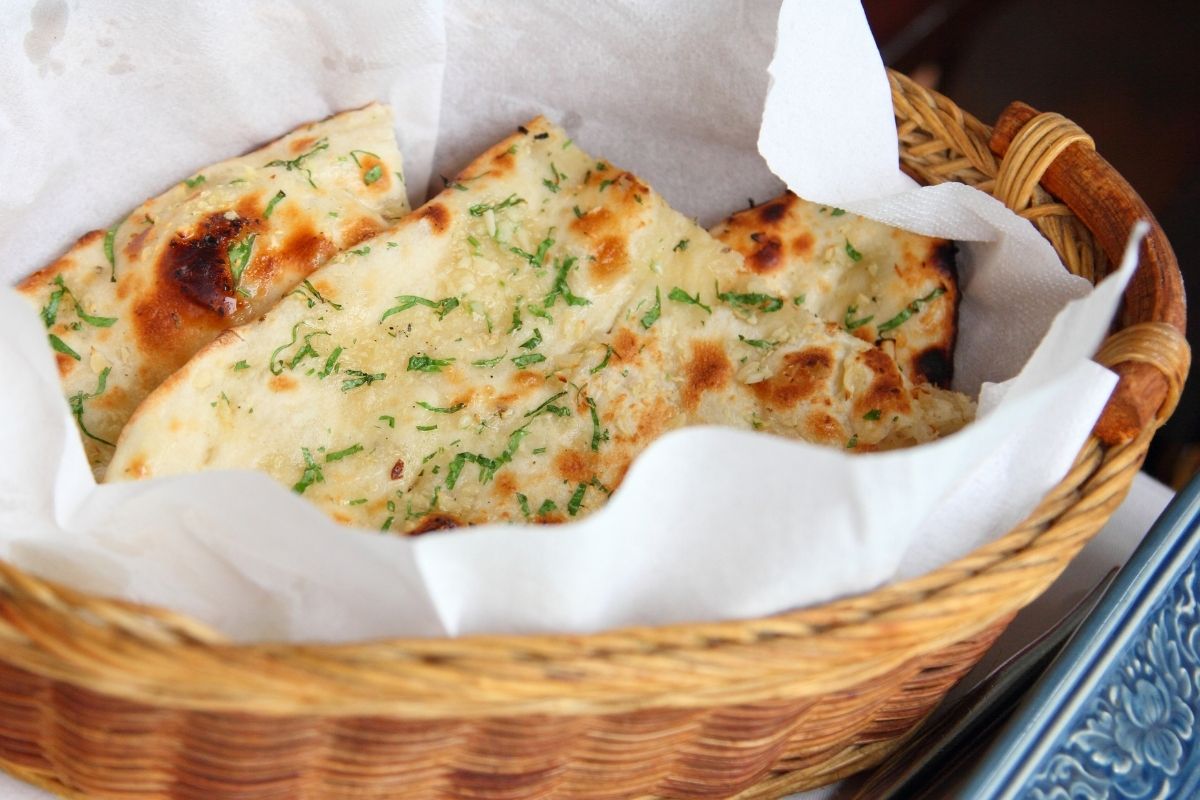 India is home to an extensive selection of flatbread that is served hot and is ideal for sopping up curry dishes.

Flatbreads such as roti, naan, and dosa are an integral part of Indian cuisine. Some of the flatbreads are baked or fried, but they can also be steamed, leavened, or slapped across the tandoori walls.

Each flatbread differs from Northern to Southern India, using distinct ingredients to achieve a certain taste.

Each region has its own spin on the type of flour used for the bread, plus the cooking method used. Generally, these pieces of bread are famous for their simple taste, coupled with nice texture and crispness. 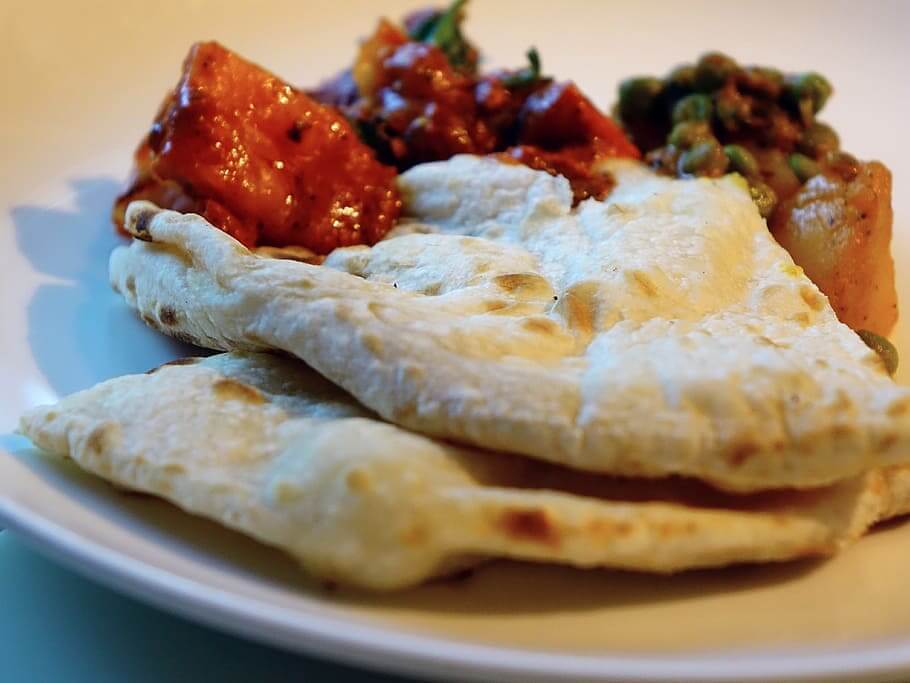 Naan is a type of Indian flatbread characterized by its dense, chewy texture, almost similar to focaccia bread. It is served hot and usually stored in a refrigerator to extend its lifespan.

Naan is made from maida, a type of white flour in India that is powdery and delicate. The way to cook naan is through a tandoori oven, to achieve the outer crispness.

Usually, this bread is seasoned with nigella seeds for their astringent flavor, usually mistaken for onion seeds or black cumin.

In bakeries, the dough is hurled on the oven’s wall, where it sticks. The bread then bakes until browned and crispy. Naan also has other varieties, with flavors such as plain, buttered, stuffed, and garlic. 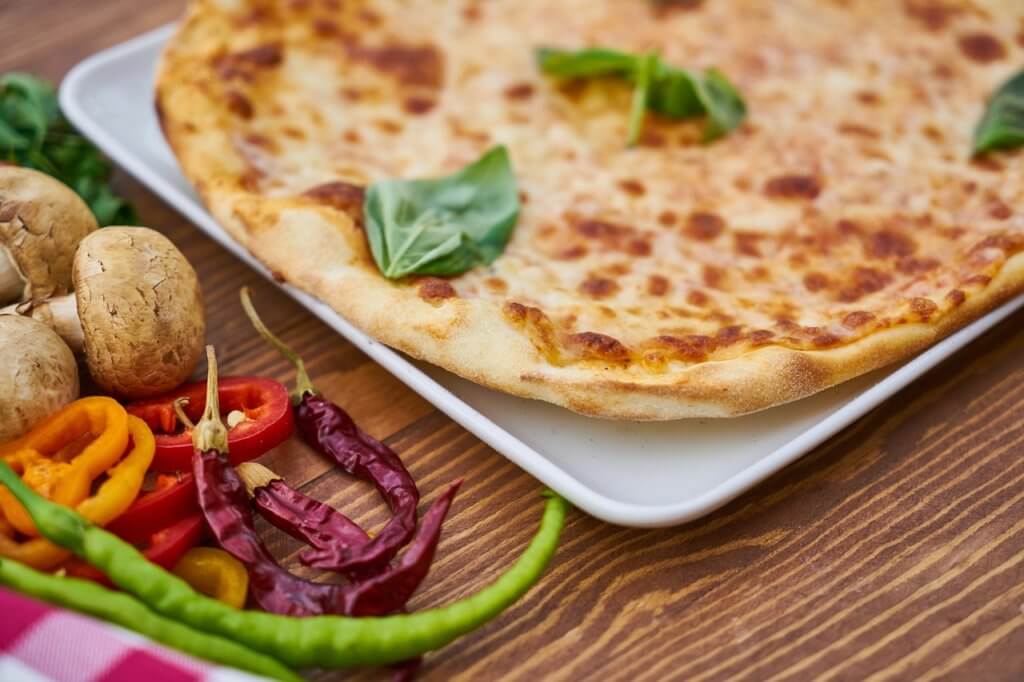 Another famous flatbread in India is roti or chapati. It is made from the stoneground wholemeal flour, traditionally known as atta.

Usually, roti is eaten as a main course, alongside meat and vegetables. Unlike Naan, Roti is unleavened, and is cooked on a flat griddle.

The fluffy variety is cooked in a tandoori, almost akin to naan’s texture, however, the roomali acts as a wrap for kebab rolls. Both are incredibly tasty and filling.

The other variety of roti includes Phulka, which is partially cooked then fire-roasted.

Differences Between Roti and Naan 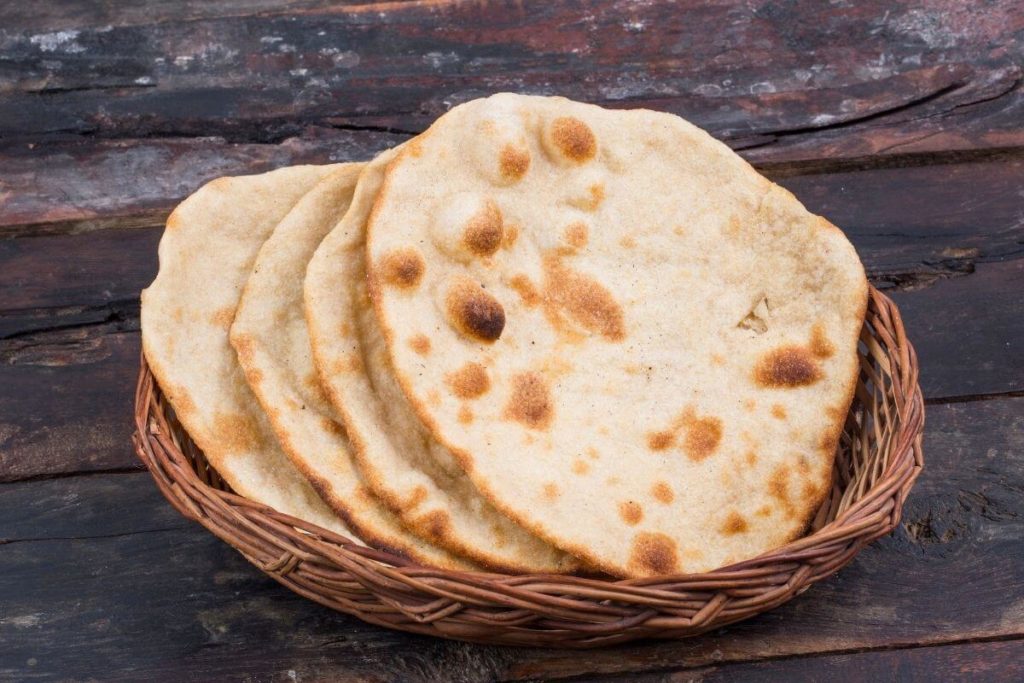 The two flatbread are almost interchangeable because of their texture, but have distinct qualities.

The first and major distinction between the two breads is the dough. Naan uses leavened dough, which is proofed with yeast or dough starter. Roti’s dough isn’t leavened and is made from whole-wheat flour.

In terms of texture, naan is softer and chewy, mainly because of the yeast, while roti is coarser and less elastic, yet chewy. Naan is thicker, while roti is thinner.

As you noticed, roti and naan are cooked and prepared in special ovens. So, what if you don’t have one at home?

It is still possible to make these two Indian breads. Because you lack the proper cooking device, the texture won’t be as perfect as those bought in Indian bakeries.

However, you can always replicate them if you are craving some Indian meals.

For naan, you will need two cups of refined flour, one-fourth teaspoon of yeast, a half-cup of curd, and a small amount of water.

Knead the flour to make soft dough and add water as required. Set aside the dough for two hours, with a lid.

Flatten to make thick pizza-like bread then pop into the oven. If you want, you can also add garlic, cumin, or chilis into the dough before baking.

What you need to make roti are whole grain wheat flour, water, and a pinch of salt. Knead until you have soft dough.

Set aside for about five to ten minutes. At this time, you can preheat the oven. Roll the dough to flatten and make it a translucent flatbread. Pop inside the oven until brown spots appear.

Roti and Naan are two of the most famous flatbreads in India. While the two are interchangeable, they also have distinct qualities.

These differences between naan and roti come from the ingredients used as well as the cooking method. In case you are craving these breads, make sure to follow the recipes mentioned to get the desired texture of the bread. 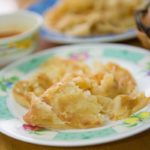 Check out these great Roti Recipes that have been shared on Pinterest. 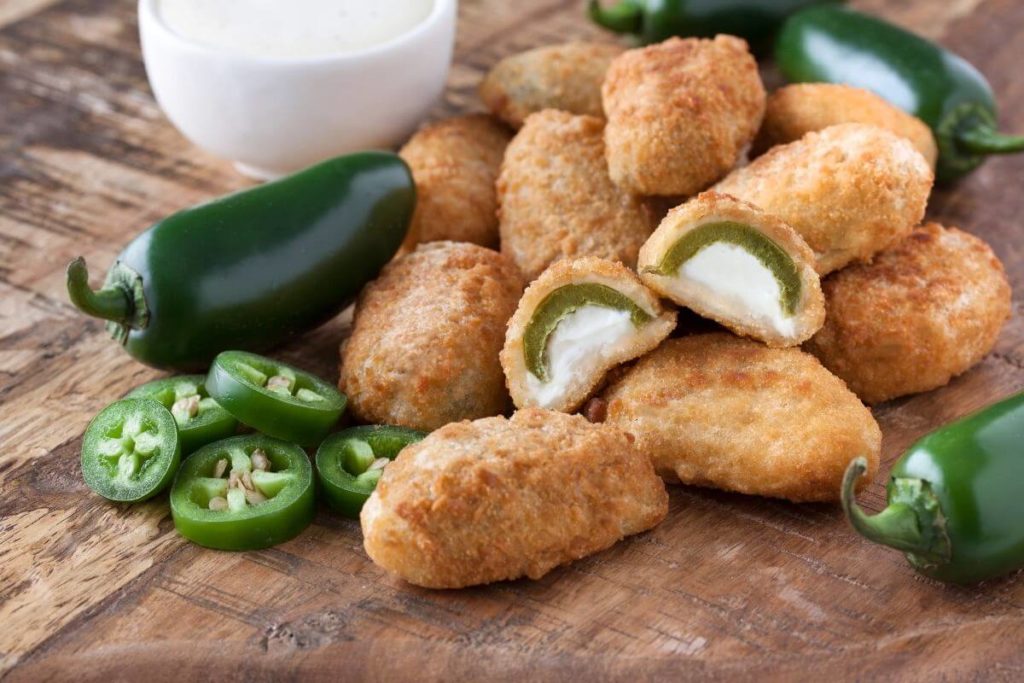 How to Cook Frozen Jalapeño Poppers in an Air Fryer 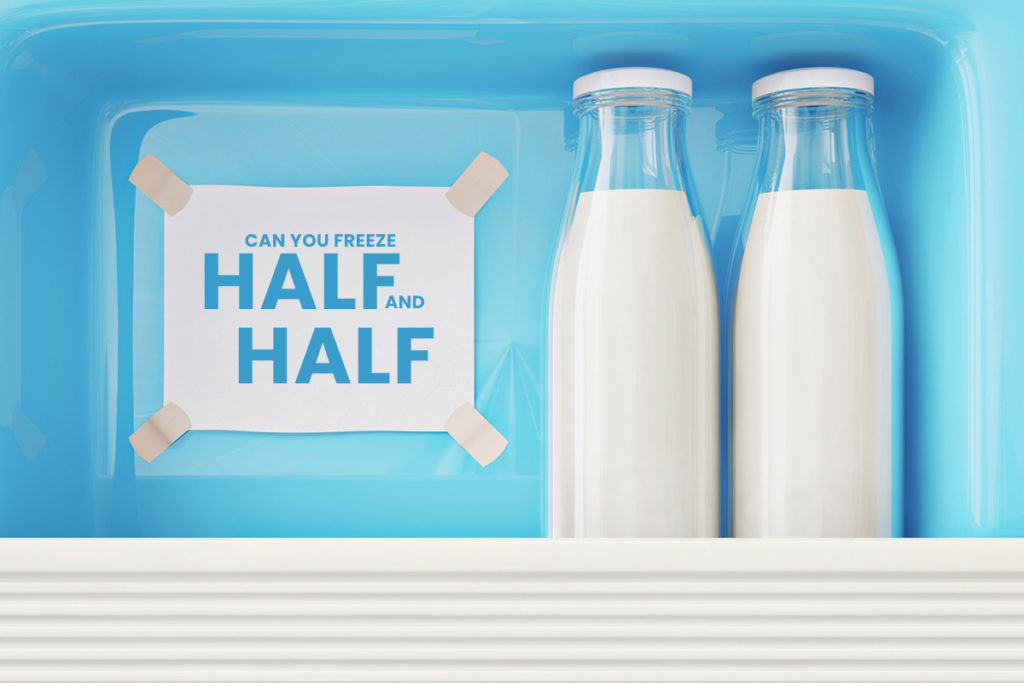 Can You Freeze Half and Half? 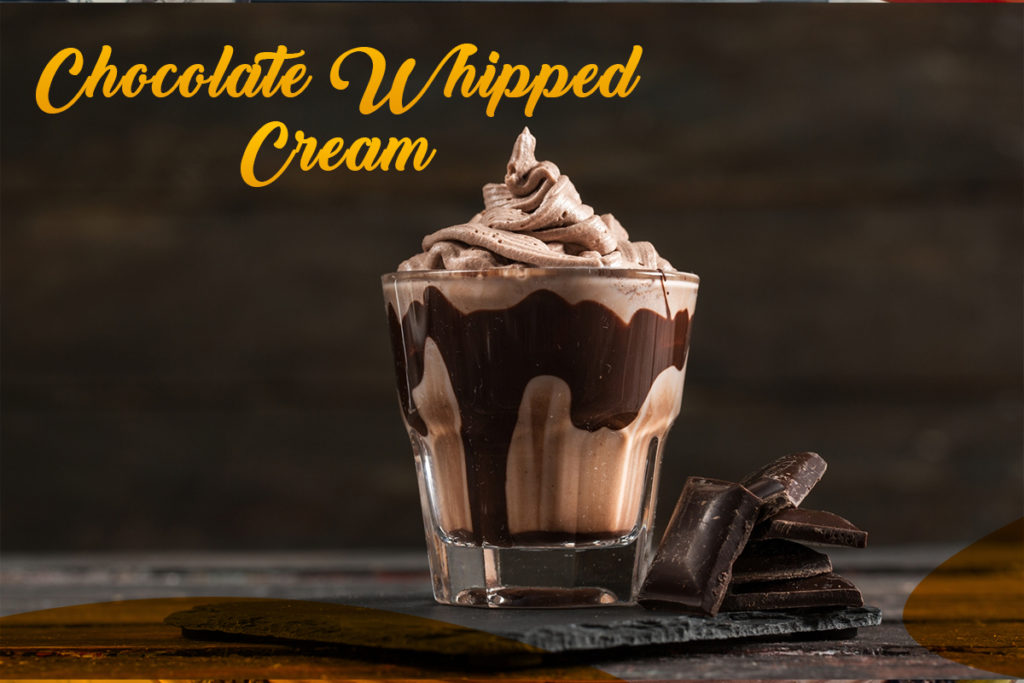 How to Make Chocolate Whipped Cream! 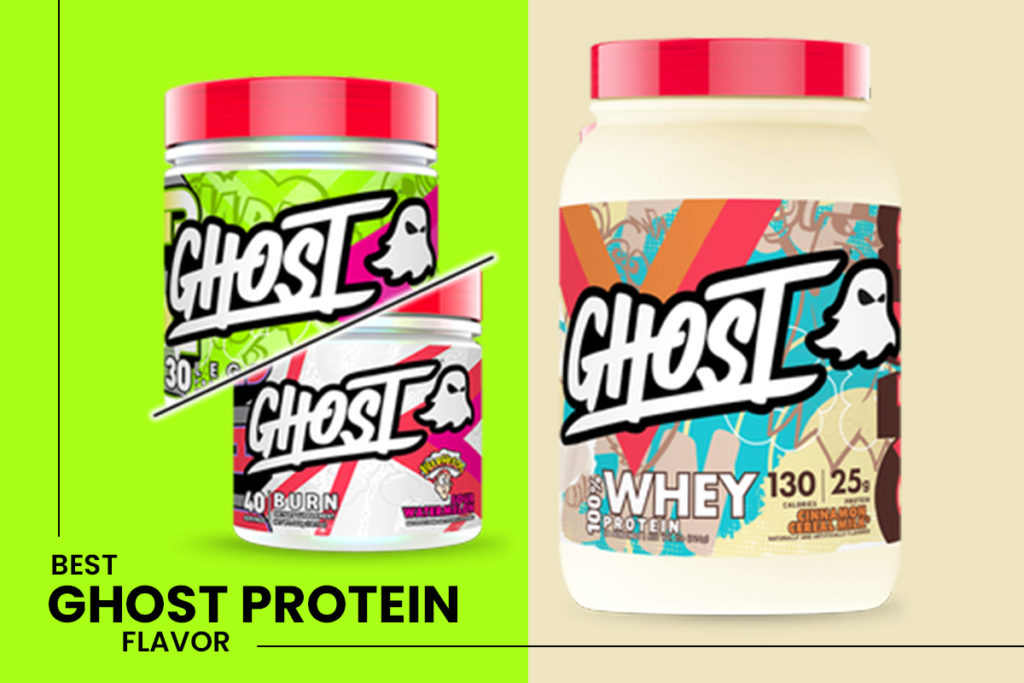